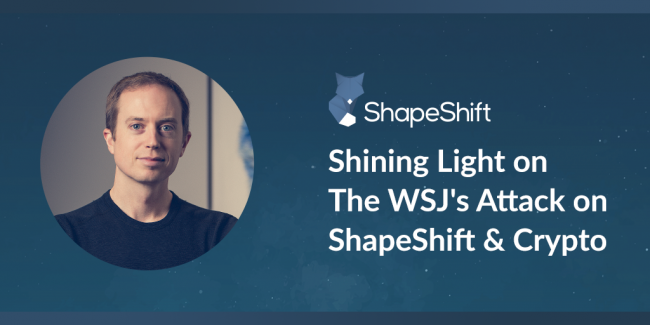 On September 28th, 2018 the Wall Street Journal published an article dubbed “How Dirty Money Disappears Into the Black Hole of Cryptocurrency”, claiming to have discovered evidence that approximately US$89 million, approx. 76,2 million Euro, in black money had been funnelled through 46 crypto exchanges. Popular exchange ShapeShift is singled-out to have been used for money laundering amounting to US$9 million, or roughly 7,74 million Euro, alone.

The company’s CEO Erik Voorhees has refuted the accusations in a blog post on October 1st, 2018. Voorhees confirms that his company had been working with WSJ’s journalists over the last 5 months, but under “false pretenses” as the article reflects only part of the information which had been exchanged during that time.

Voorhees insits that ShapeShifts continuously complies with all laws and regulations, and deploys AML (anti-money laundering) mechanisms, which use “blockchain forensics that are far more advanced than asking someone for their ‘name and address’.” Furthermore the accused claims that, through the undercover nature of their research WSJ has aided “potential illicit activity” by withholding gathered data “in order to build their story.”

ShapeShift’s response indicates that the research done by the WSJ is poorly done, incomplete, and arrives at many wrong conclusions. According to the blog post the analysis conducted by the reporters exhibits a lack of understanding regarding blockchain technology in general. Thus misinterpreting transactions, which led them to false imputations:

“$600 of suspicious funds were sent to an exchange that wasn’t ShapeShift. Because ShapeShift happens to be a customer of this same exchange — 10 months later in a completely unrelated transaction — the exchange sent funds to ShapeShift. The authors didn’t understand how to properly read the blockchains transactions, so they assumed there was $70k in “dirty money” sent to ShapeShift.”

Vorhees concludes his resposne by saying that “we are trying to pioneer a new financial system, and we don’t expect to be loved by the proponents of the old.” He continues: “We will push forward, and we’d suggest the WSJ change their title to be more accurate and objective, ‘Less than two tenths of one percent of ShapeShift’s business might be illicit.’”

Author’s opinion: Having met charismatic Erik Vorhees in person at the Unchain Convention 2018 in Hamburg, I strongly believe that attacking Voorhees on his home turf, requires a lot more expertise, solid reasoning and airtight evidence, than the WSJ’s reporters seem to be capable of when it comes to the buzzword subject of blockchain.